Sometimes you’ll need to find a number in a list that is farthest from zero, where some numbers might be positive and others might be negative.

This task has 2 considerations:
1. You will need more than a simple MIN or MAX function.
2. You will want to decide how to display the number, either as…
(a) …its raw actual appearance in the list, be it positive or negative, or
(b) …its absolute representation as a positive-looking number even if that raw number is negative. 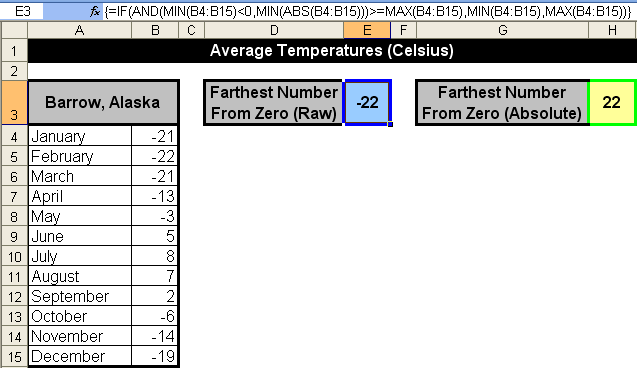 In the next picture, the absolute number 22 is returned in cell H3 with this array formula:
=MAX(ABS(B4:B15)) Note, these formulas are both array formulas. Recall, an array formula is applied to a cell by simultaneously pressing the Ctrl+Shift+Enter keys, not just Enter. The curly braces are not typed in by you; Excel places them automatically when the array formula is properly applied.

8 comments on “Tom’s Tutorials For Excel: Finding the Number Farthest From Zero”